Get the FREE Guide To Stop Carbs and Sugar Cravings 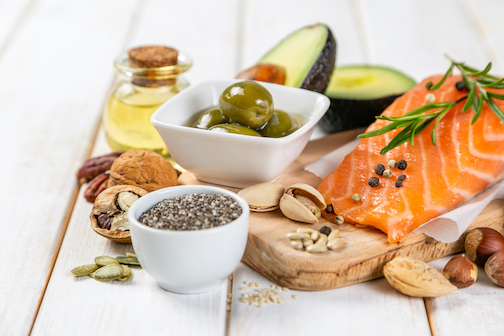 There’s a lot of talk about healthy fats these days. People are including more fat in their diets and forgetting about the fat-free diet crazes of the past.

You’ve probably heard about omega fats in the mix, but what exactly are they?

What are Omega Fats? Do they all perform the same function in our bodies?

Omegas are a group of fatty acids known as Omega-3, Omega-6, and Omega-9. They’re numerically named based on their chemical composition.

Omega-3 and Omega-6 fatty acids are essential fatty acids (EFA’s). The body can produce some fatty acids on its own, like Omega-9 – meaning you don’t need to get them from food.

But the fatty acids the body can’t create on its own must be obtained from food, and therefore, are considered essential. Both fats are needed for good health, but most diets contain an abundance of omega-6 and not enough omega-3.

This skewed ratio between omega-3 and omega-6 is considered a cause of chronic inflammation that can lead to scary stuff, like heart attack and stroke.

A 1:1 ratio is ideal for keeping inflammation at bay, but it’s estimated that most people have a ratio closer to 20:1!

Low intake of Omega-3’s means most people are missing out on the major health benefits of this essential fat.

The protective qualities of Omega-3’s include:

Which foods are the best sources of Omega-3’s?

Omega-3’s actually include several types of fats, including:

The best sources of ALA include flaxseed, chia seeds, and walnuts.

Canola and soybean oil are also good sources of ALA, but these oils aren’t the healthy options since they quickly oxidize and turn rancid, which promotes inflammation and cancels out any beneficial effects of the omega-3s they contain.

ALA needs to be converted into EPA or DHA by the body for it to be utilized. This process is inefficient, with estimates of 1-20% of the ALA we consume being converted into a usable form.

Although it would be hard to meet all your omega-3 needs only with sources of ALA, flax, chia, and walnuts, these are still healthy fats with lots of other good-for-you vitamins, minerals, and antioxidants.

Since fish contains the ready-to-use EPA/DHA form, it is recommended that most people obtain their omega-3’s from fatty cold-water fish, like salmon, tuna, herring, and sardines.

Did you know fish don’t produce the omega-3s they contain? Instead, algae make EPA/DHA and fish accumulate the fat from the algae they eat. Cool fat fact!

If omega-3’s from fish are so good for us, shouldn’t we be eating fish every day? Nope!

How much Omega Fats should we be eating? Do I have to eat fish or take fish oil?

While there are no official recommendations for daily omega-3 intake, it’s thought most people can meet their basic omega-3 needs by consuming fish 2x/week.

To avoid taking in too much mercury, a toxic heavy metal in fish, you should alternate the types of fish you eat and limit varieties known to be high in mercury.

If you choose not to consume fish because of mercury or other concerns, it’s best to supplement with fish oil or, if you’re vegan – try algae oil. Fish and algae oils don’t contain mercury as a result of processing.

It’s generally considered safe to consume up to 3 – 6g of fish oil per day. If you include a high-quality fish oil supplement and a variety of sources of healthy fats in your diet, you don’t have to worry about counting omega-3s.

People who are managing symptoms of heart disease or other illness may benefit from even higher, therapeutic doses of omega-3’s.

However, high doses of fish oil could interfere with blood clotting. If you’re currently taking blood thinners or have surgery scheduled, you should check with a healthcare provider before supplementing.

1 cup unsweetened non-dairy milk, such as almond or coconut

Combine milk, chia seeds, sweetener, and vanilla in a mixing bowl and whisk until well-combined. Alternatively, you can place ingredients in a glass jar with a lid and shake to combine.

Tip: You can add 2 tbsp cocoa powder (unprocessed preferred) to the pudding mixture to make a rich chocolatey version!

Precision Nutrition – All About Fish Oil